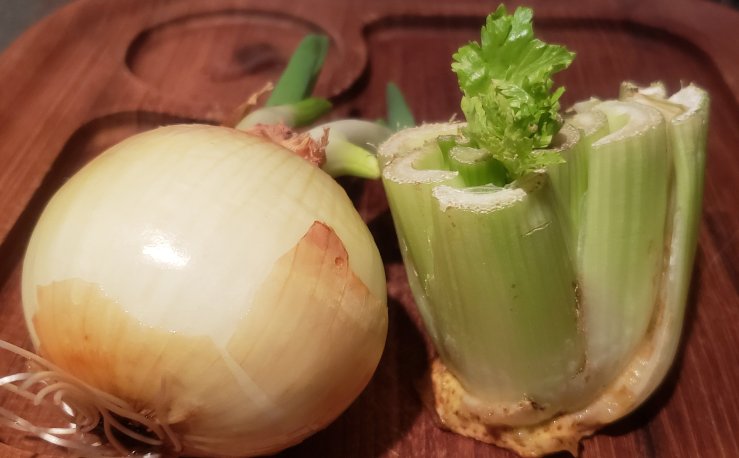 At its most basic, the story of life on earth is the competition among species to capture and store as much energy as possible—either directly from the sun, in the case of plants, or, in the case of animals, by eating plants and plant eaters.”

January in Vermont. Fog rolls languidly down the mountains and catches on the outstretched tips of the treetops. Blue home-smoke drifts almost stagnant across gray roads that can’t decide to be icy or not. In the same week, temperatures swung from minus eight degrees to nearly forty, and the two feet of snow melted by the rain has nothing better to do, it seems, but seep into the basement.

This cycle of freeze and thaw, accumulation and dissipation reminds me of what I consider a small miracle: some of my pantry vegetables have sprouted. It started with one very determined onion, forgotten in the mesh bag, and then I decided to try with the bottom of a celery stalk. To my great surprise and delight, the tiny leaves and stems at the heart of the stalk have started protruding from the base, reaching toward the fleeting sun.

It may sound strange, but this is incredible to witness for me. As someone who enjoys eating meat, I know and accept that getting it to my table it involves the taking of life. But whereas eating animals necessitates killing, eating plants requires…growing. In this case, just a little water and light were needed. True, there is still some inevitable destruction involved in eating plants, but now I have beautiful little living things where I once had trash-destined old vegetables. I’ve never done this before, but I like it.

It’s almost as if the onions and celery know I’ve been reading up on how healthy and amazing they are. I’m fortunate to have great produce available even in the dead of winter. In the springtime, I hope to plant my sprouted vegetables in the ground – also a first for me. Maybe gardening will serve to counterbalance the hunting I aspire to do. What’s next? Perhaps I can sprout some beans. I know a potato won’t take much coaxing. This is the start of something amazing. A sprouted onion may seem a trivial thing, but I think it’s another one of food and nature’s wonders.